This is a 3D model of a Space Marine, created with Blender. All textures have been created with GIMP. Feel free to download the blender file and textures, as well as the walk cycle spritesheets, and use them according to the terms of the CC BY-NC-ND 4.0 License.

I wanted to use the model inside a 2D RTS game on which I was working. To do so, it was necessary to render all possible views of all animations, like walking, shooting or dying, into 2D spritesheets. In Blender, it was easily possible to render the walk cycle (currently still the only animation) from several orthographic views, each to a series of PNG images, including a shadow that is cast onto an invisible ground. The only remaining problem was how to assemble the image series to spritesheets. I struggled with scripting in GIMP for a while, until I discovered that there is a pretty simple way to do the trick with ImageMagick. The magic command to assemble all PNG images (of size 120x140 pixels) inside the folder "back" into a 4x4 images spritesheet "back.png", for instance, turned out to be the following:

The result were sprite sheets like this, which could directly be used inside the 2D game engine: 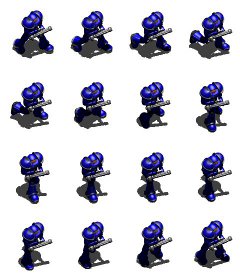 Unfortunately, some of the details of the character became invisible in this minified views. Of course that doesn't mean they were useless, as one could still use the model for another application, like a 3D game, a still image or a video. Here's a more close-up rendering, using a very simple space environment: 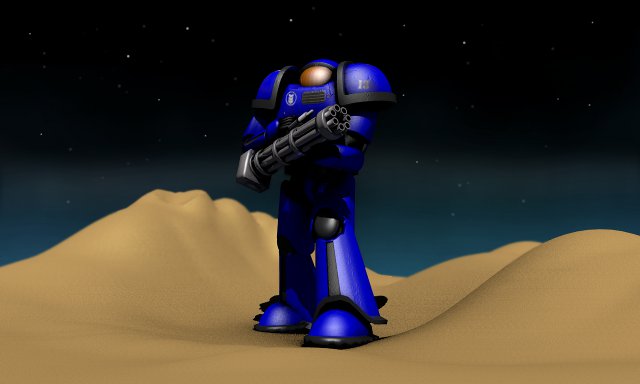